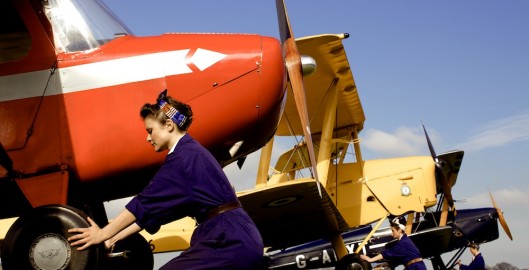 2014’s calendar has a 1940s wartime theme and aims to capture a series of narratives from the period.

All the pictures – bar one – were taken on an a Canon Eos 5D Mark II using a Canon EF 50mm f/1.2L lens to help create an authentic period look. The exception being ‘The Harley’ which was taken with a Canon EF 100mm f/2.8 lens.

To create a convincing period look with a modern digital camera, even one as good as the Canon Eos 5D Mark II, is always going to be a challenge. Back then 35mm camera lenses were often less precise; film stocks were significantly different and print fixing more haphazard. Then there’s the whole grain issue to deal with. So rather than to attempt to age the photographs to look like a ‘40s picture that has been around for over sixty years with all its commensurate wear and tear, we decided instead to create the pictures to look as close as possible to the way they would have looked freshly printed at the time.

All the proceeds of the sales of the Compton Calendar raise money for The Waterloo Military Families Fund. The beneficiaries being the Army Benevolent Fund, Caring for Courage, SSAFA, Combat Stress, Defence Medical Welfare Service and Scotties Little Soldiers.

Many, many thanks to all the diverse people concerned both in front of the camera and behind the scenes without whom this production would not have been possible.

A little update to say that the Compton Team are hoping to raise £10,000 for The Waterloo Military Families Fund. By mid-November 2013 the total already stands in excess of £4,000. Well done to all concerned and if you haven’t bought yours yet then order yours today from http://www.comptonabbasairfield.co.uk/?agent=abbasair&page=calendar2014